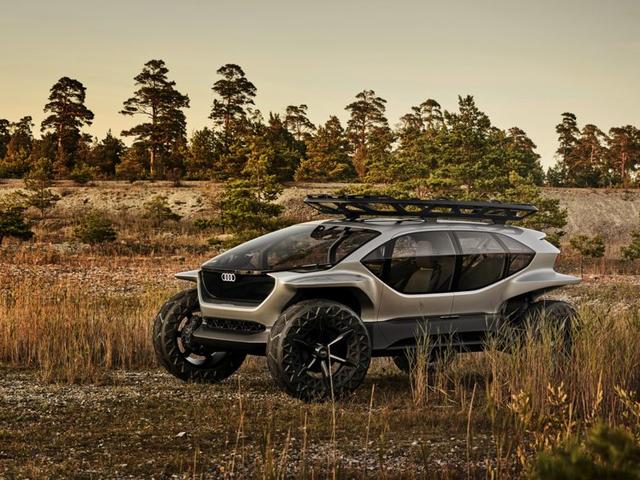 Audi recently revealed its concept emissions-free quattro that comes with drones instead of headlights. It's called the AI:TRAIL, and it's the fourth release in Audi's series of concept electric vehicles, which also includes the Aicon, AI:ME, and AI:RACE. The vehicle was designed with the feeling of nature in mind. The car gets its "Trail" moniker because it evokes the idea of "exploring nature," according to the automaker. To do this, Audi constructed the cabin of the AI:TRAIL out of mostly glass to provide an unobstructed view of the passengers' surroundings. There also isn't a big-screen infotainment center inside of the car. Instead, a smartphone mounted in front of the driver serves as the display and control center screen for the car's functions and navigation. Read more: This 'self-charging' electric car has a dashboard filled with dead moss to clean the air "The aim of the designers here was to give those inside the vehicle the best possible view of nature and their surroundings, breaking the boundaries between the interior and the world outside," the automaker said in a prepared statement. "When the car is moving, the occupants' gaze is not merely focused on the terrain ahead but is free to wander and happen upon little details in the open spaces around them." The 3,858-pound AI:TRAIL concept has a horsepower of 429, according to Autoblog. It can also hit top speeds of 81 mph and has a range between 248 and 310 miles on paved roads and "easy off-road terrain." On rougher paths, the range drops to 155 miles. The vehicle also has features that make it more optimized for trail-traveling. For example, the two back row seats are designed to be hammocks that can be removed and used as portable outdoor seating. And instead of headlights, the AI:TRAIL relies on five LED drones that illuminate the trail. Take a look at Audi's concept vehicle: