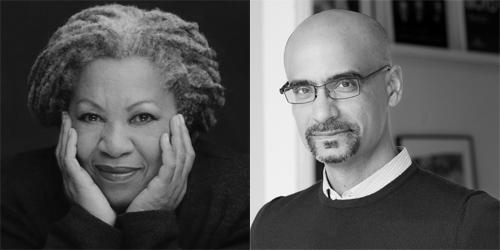 On December 12th, the New York Public Library hosted a live program featuring Pulitzer Prize-winning author Junot Díaz in conversation with the writer who most deeply influenced his career, Toni Morrison, winner of the 1993 Nobel Prize in Literature. The talk was originally streamed live on the web (including our site), and now you can watch a recorded version below, plus some highlights above. Introductions by Paul Holdengräber and friends begin at the 40:09 mark, and everything gets really going at the 49:35 timestamp in the video below. Despite some nerves, Díaz engages his now 82 year-old literary idol in a conversation that’s engaging, colorful, sometimes even amusingly off-color — like when he tells Morrison ”you can outwrite every motherf#cker on the planet sentence for sentence.” The interview touches on her formative years as a writer and editor, and then her years writing her masterful novels – Song of Solomon, Beloved and the rest. Commentary on the craft of writing is sprinkled throughout. If you’d like to get Morrison’s writing advice in a neatly-packaged format, please see our previous posts: Toni Morrison Dispenses Writing Wisdom in 1993 Paris Review Interview and Toni Morrison, Nora Ephron, and Dozens More Offer Advice in Free Creative Writing “Master Class”.