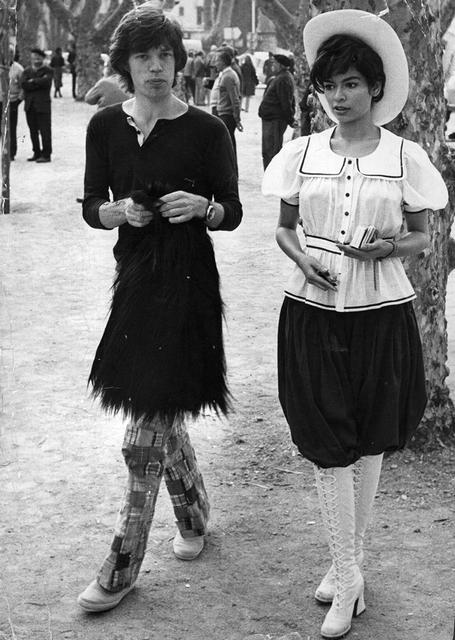 Girls borrowing from the boys isn’t anything radical or new—the most fashionable women have been doing this for years. Marlene Dietrich made black-tie look elegant and feminine simultaneously, Katharine Hepburn held her own against leading gents including Spencer Tracy in trousers, and Bianca Jagger shocked everyone when she wore a white suit to wed Mick Jagger. So why did the sight of Jay Z in a women’s Rodarte jersey last weekend get everyone talking? After all, embracing the nipped-in waists, bold palette, and fun textures of womenswear is a concept that some of music’s alpha males have been exploring for more than half a century. When the Rolling Stones fully came into their own, they’d ditched the idea of matching uniforms and similar hairstyles, instead embracing each other’s individuality. There was Keith Richards in his scarves, and Jagger in his skin-tight jeans—which he still wears—to glittery makeup and disco ensembles with embellishments, looks with theatrical prowess that influenced performers down to Michael Jackson and Justin Timberlake. About a decade later, David Bowie and his fluid approach to masculinity was similarly embraced by pop culture—and the public—with the arrival of his hit single “Starman” and the album The Rise and Fall of Ziggy Stardust and the Spiders from Mars. Transforming himself into Ziggy wearing spandex suits, colorful makeup, and prancing onstage, Bowie’s self-created character was emblematic of the free-spirited attitude. After the hypersexuality of the 1960s and 1970s, glamour and luxe androgyny became au courant with the rise of Grace Jones and Prince in the 1980s. Prince’s eccentric Purple Rain-era ensembles featured ruffled, high collars, exaggerated shoulders, tiny waists, and oftentimes, sequins. Promoting a new archetype of masculinity wrapped in a shiny container, Prince paved the way for stars like Lenny Kravitz. In the music video for his hit song, “Are You Gonna Go My Way,” Kravitz is dressed in high-heeled platform boots and a sleeveless red tunic over matching trousers, a look that lends the singer a rugged sexual energy with a pretty polish. And then came the 1990s and grunge, embodied by Kurt Cobain. Frequently performing onstage with Nirvana in wife Courtney Love’s baby-doll dresses, shredded jeans, and leopard coat, Cobain’s risk-taking fashion revealed a progressive mindset, proving that guys could enjoy heavy metal, protopunk, and other types of aggressive music while still blurring the gender lines, and thus inspiring a generation of boys who borrow from the girls. Ariel Pink and Jared Leto have embraced a similar sensibility with mesh tops, slip dresses, floral prints, and tweed. The dichotomy of the grunge guy wearing feminine silhouettes and fabrications has entered fashion numerous times but most apparently at Dior Homme and now Saint Laurent Paris under the helm of Hedi Slimane. But when rappers dress in women’s clothing, it’s a truly radical moment, upending hip hop’s celebration of male swagger and macho bravado. Pharrell Williams navigates both ends of the gender spectrum, with a masterful balance of street style and runway panache that mixes sartorial staples such as Adidas Stan Smith sneakers, his now infamous Vivienne Westwood hat, and Chanel lariat necklaces.