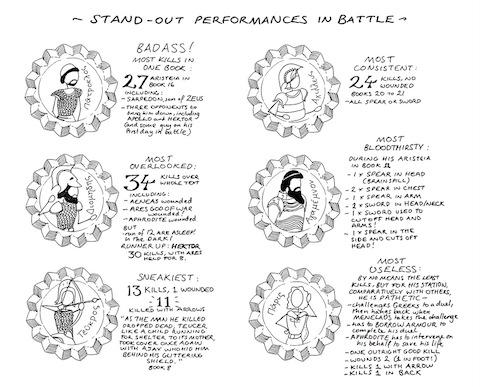 The next time some know-it-all moralist blames any number of social ills on violent video games or action films, ask them if they’d rather kids stick to the classics. When they invariably reply in the affirmative, you can smugly direct their attention to Greek Myth Comix’s astonishing infographic detailing the multitude of gruesome killings in the Iliad. Homer’s epic unflinchingly describes, for example, in graphic detail, the death of Lycon, who in Book 16 has a sword thrust through his neck: “nothing held but a piece of skin, and from that, Lycon’s head dangled down.” And if you’ve held on to your lunch, you may be interested to know the grisly circumstances of the other two candidates for “grimmest death.” Just below, see a section of the comic celebrating “stand out performances in battle.” Can Zack Snyder’s King Leonidas match kills with Homer’s Achilles? Only one way to find out….