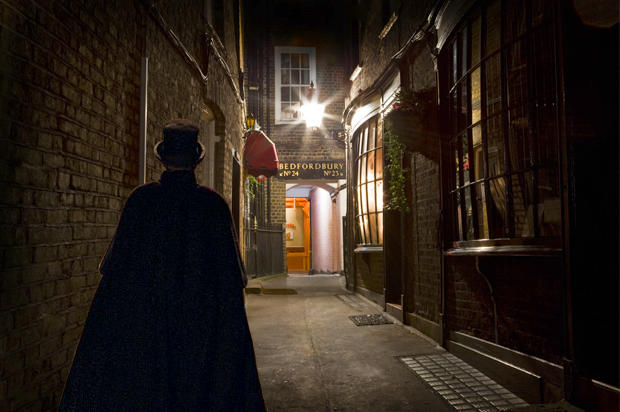 “The Art of the English Murder: From Jack the Ripper and Sherlock Holmes to Agatha Christie and Alfred Hitchcock.” In 1888, a serial killer was terrorizing the East End of London. The few undisputed facts about him are rather grubby and shop-soiled from so much handling, and the identity of the murderer is still a complete mystery. Over the summer and autumn, several killings of prostitutes on the streets of Whitechapel and Spitalfields became linked—at least in the public’s imagination—with a single perpetrator. The removal of internal organs from three of the women led people to think that he must have had medical knowledge, and be experienced in dissection. The final touch came from a hoax letter, purporting to be from the killer but probably written by a journalist aiming to stir up the story. He signed it with the name that stands today as shorthand for a whole ragbag of half-facts and inferences: the assumption that there was a single killer and mutilator, trained as a doctor, who called himself ‘Jack the Ripper.’