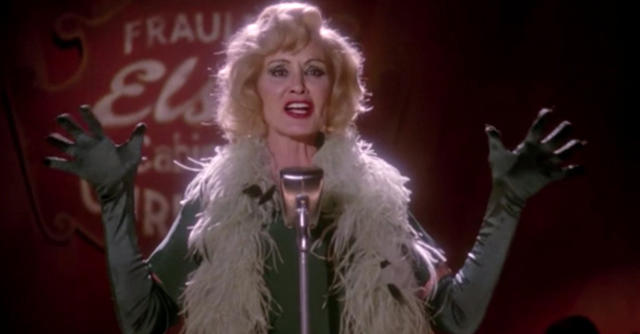 Another episode, another cover song on Ryan Murphy's Glee — oops, excuse us — we mean American Horror Story: Freak Show. Like the kids on Glee, the fame-hungry Elsa Mars (Jessica Lange) once again belted a song to propel the story's narrative in Freak Show's Episode 3. This time, she covered "Gods & Monsters," Lana Del Rey's 2012 ballad about hedonism. In the performance sequence, Elsa is rehearsing on Halloween night, which is forbidden among freak show performers because such behavior is rumored to summon the legendary two-faced Edward Mordrake from the dead. Edward, an aristocrat with a demonic face on the back of his head, was driven mad in the 1800s because his second face whispered evil things to him "only spoken of in hell." He once killed everyone in a freak show and then hanged himself. Every Halloween since, he returns whenever a freak show holds a performance and chooses someone to join his troupe in the afterlife.