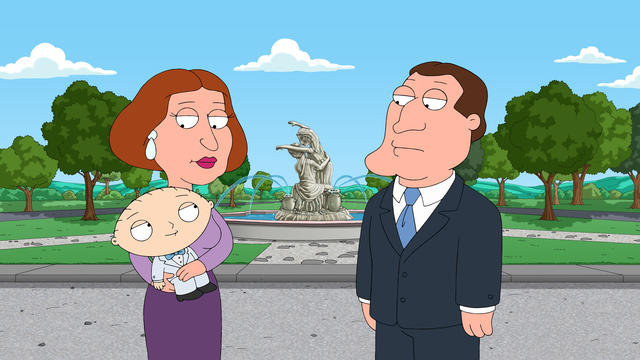 Earlier on in the series, Stewie swore that he would no longer travel back in time after altering the past on numerous occasions. But unfortunately, Stewie has to put up with a rather flamboyant and eccentric family, so this just wasn’t possible. Fed up of the family after Peter and Chris’s game of ‘Unga Bunga’ ruins his favourite TV show, Stewie decides to rebuild the time machine and go back several months before he was born. His goal is simple: break up Lois and Peter and erase his existence. Stewie is successful, and ends up being born into a rather prestigious and wealthy British family. Since his favourite show is a British Period-Drama, Stewie cannot believe his luck. After getting to know his new parents and siblings, he soon misses the Griffins and realises that he has made a huge mistake. Fortunately, he’s able to sneak into Oxford University and raid the physics lab for some plutonium so that he can get back to the time before he destroyed his parent’s relationship. ‘Chap Stewie’ was a surprisingly enjoyable episode, and a great way to cap off an unpredictably hit-and-miss season of the show. The gags came thick and fast, starting with a joke about Jeremey Piven as The Hulk. Why make fun of a celebrity in that way? – The simple answer is because it’s funny. It’s also typical of Family Guy, and the show seems to be able to get away with these sorts of witty and satirical gags because of its reputation. Others followed this brilliant opener, such as Peter using up all of the plug sockets to make toast. This is accompanied by the phrase ‘Toast House’ – a reference to a previous gag in Family Guy about a movie from the 1980’s.