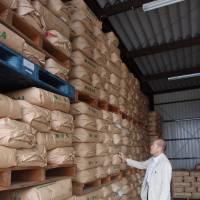 Rice has become an increasingly popular ingredient in cosmetics and beverages as people eat less of what used to be Japan’s main staple. In June 2012, Kose Provision Co. launched lotions and creams containing extracts made by fermenting and maturing rice. The affiliate of major cosmetics maker Kose Corp. claims the cosmetics in the Maihada line are effective in moisturizing skin. The lineup, available only by mail order, has gradually become popular and lured more than 100,000 subscribers to the online shop, Kose Provision officials said.