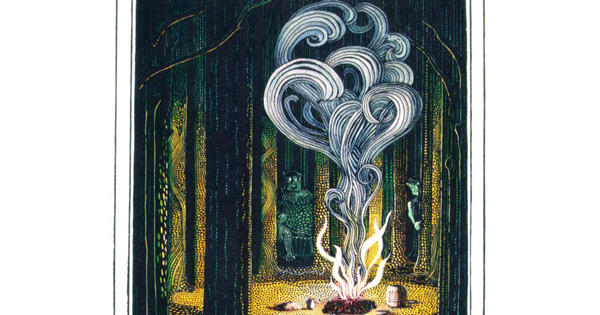 An important side of the beloved writer, who was as much an artist of pictures as he was of words. Storytelling icon J.R.R. Tolkien (January 3, 1892–September 2, 1973) was also among those rare creators with semi-secret talents in a discipline other than their primary realm of fame — but while his original sketches for the first edition of The Hobbit have seen the light of day in recent years, few realize that Tolkien, who self-illustrated many of his famous works, was as much an artist of pictures as he was of words. Unlike other famous authors who also drew but only as a hobby or diversion, including Sylvia Plath, William Faulkner, and Flannery O’Connor, Tolkien approached the visual medium with as much thoughtfulness and imaginative rigor as he did his stories. J.R.R. Tolkien: Artist and Illustrator (public library) collects more than 200 color reproductions, many previously unpublished, of Tolkien’s surviving art in watercolor, pencil, and ink, spanning sixty years of his life — from his childhood drawings to his illustrations for his books to his final sketches, as well as the drawings he created for his own children, his obsessive calligraphy, and his imaginative maps of Middle Earth.