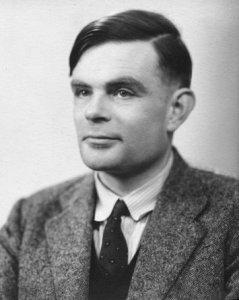 The Financial Times reports that the notebooks of computing hero Alan Turing (subject of the The Imitation Game, newly Oscar nominated), will head to Bonhams auctions on April 13. At 56 pages, the notebook is “probably the most extensive manuscript that exists in Turing’s hand,” according to specialist Cassandra Hatton, and dates from 1942. (Turing committed suicide in 1954 at age 41, via a poisoned apple, which some speculate may have been a tribute to the 1937 Disney the movie Snow White, a favorite of his.)