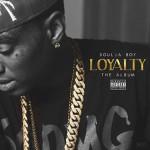 posted Thursday February 05, 2015 at 03:30PM PST | 1 comments Soulja Boy’s 15-track "Loyalty" features Rich The Kid on "Og Gas." Soulja Boy has released his Loyalty album. The 15-cut collection features the songs “Don’t Nothing Move But The Money,” “Hurricane” and “Og Gas,” which features Rich the Kid. On Monday (February 2), Soulja Boy and Gillie Da Kid reignited their feud over social media. While the rappers were in Dubai, Soulja Boy took to Twitter claiming to have slapped Gillie Da Kid.