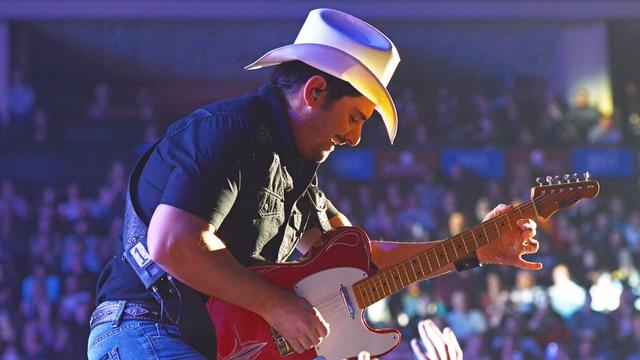 During last year's Country Nation World Tour, Brad Paisley paid tribute to the guitar heroes who came before him, often taking a few minutes during the middle of his set to shred his way through some of rock & roll's most memorable riffs.  Guitar licks from Guns N' Roses' "Sweet Child of Mine," the Eagles' "Life in the Fast Lane" and Deep Purple's "Smoke on the Water" all made the cut, as did an abridged version of Van Halen's "Hot for Teacher," which focused on Eddie Van Halen's finger-tapped fretwork rather than David Lee Roth's campy come-ons. Months later, Paisley is gearing up for a new tour that kicks off in mid-May — but that doesn't mean he's quit covering his favorite classic rock tunes.