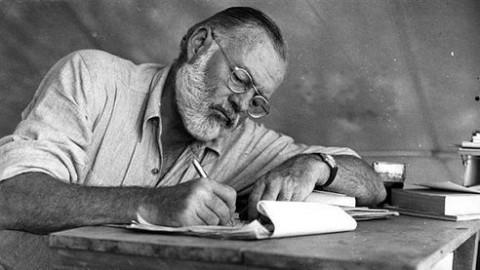 A piercingly dark piece of writing, taking the heart of a Dickens or Dostoevsky novel and carving away all the rest, Ernest Hemingway’s six-word story—fabled forerunner of flash- and twitter-fiction—is shorter than many a story’s title: The extreme terseness in this elliptical tragedy has made it a favorite example of writing teachers over the past several decades, a display of the power of literary compression in which, writes a querent to the site Quote Investigator, “the reader must cooperate in the construction of the larger narrative that is obliquely limned by these words.” Supposedly composed sometime in the ’20s at The Algonquin (or perhaps Luchow’s, depending on whom you ask), the six-word story, it’s said, came from a ten-dollar bet Hemingway made at a lunch with some other writers that he could write a novel in six words. After penning the famous line on a napkin, he passed it around the table, and collected his winnings. That’s the popular lore, anyway. But the truth is much less picaresque.