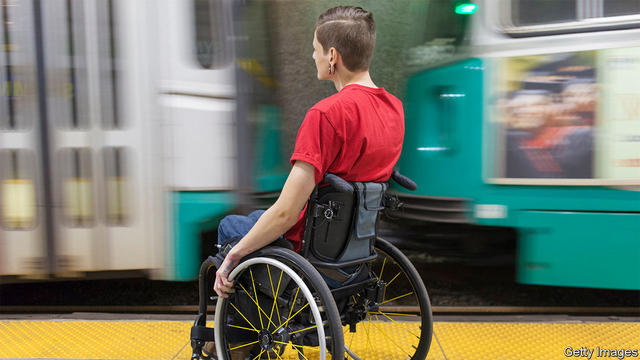 The case for treating disabled travellers better - Some way to go — economist.com

TRAVELLING for work can be expensive, uncomfortable and unpleasant, even for those without a mobility issue. But spare a thought for people who do, many of whom get appalling service from train firms and airlines around the world. The latest case to have hit the headlines is that of Tanyalee Davis, a Canadian living in England, who has said that she was left feeling so humiliated that she “wanted to crawl under a rock and die” after a recent train journey from Plymouth to Norwich. Ms Davis, who uses a mobility scooter as she has a form of dwarfism, was forced to move from an unreserved wheelchair space to make way for a pushchair (pushchairs do not have priority for such spaces). When she complained, the guard announced to the train that they would be stopping indefinitely at the next station because the “woman in the mobility scooter was causing problems.” For Ms Davis, a touring comedian, incidents like this are all too frequent and are no laughing matter. And she is not alone. Frank Gardner, a disabled journalist at the BBC, a broadcaster, is often left on planes for hours after the other passengers have disembarked because his wheelchair has not arrived on time. Get our daily newsletterUpgrade your inbox and get our Daily Dispatch and Editor's Picks.Treating the disabled badly is a false economy for the travel industry. One in five Americans and one in six Britons, with a total of one billion people worldwide, have a physical or mental impairment that has a substantial negative effect on their ability to carry out normal daily activities. But although the plight of the disabled traveller has improved markedly in recent decades, major obstacles still exist. So-called “accessible” hotel rooms have roll-in bathrooms but not enough space to manoeuvre a wheelchair around the bed; floor numbers are written in braille in lifts but room numbers on doors are not, and travellers are often left stranded on at the bottom of steps, on trains or alone in unfamiliar places. Beyond the clear moral and legal case for making transport more accessible to disabled people, there is a strong economic case for businesses to cater to them too. In America, people with disabilities spend $17.3bn a year on travel, up from $13.6bn in 2002, according to the Open Doors Organisation, a lobby group for the disabled. Throughout the developed world this group is growing as populations age and as disabled people seek more travel options. In particular, baby-boomers in their dotage have cash and are more active and adventurous than generations before them. And disabled travellers tend to spend more than their able-bodied counterparts, often travelling with a carer, family or friends. They tend to remain loyal to those who serve them well and quickly desert businesses that fail them. Scope, a charity, estimates that poor customer service and a lack of awareness of disabilities cost British businesses up to £21.6bn ($28bn) a year in lost revenue. As disabilities vary so much, there is no silver bullet for solving the problem. In Britain only around 8% of people with disabilities use wheelchairs, while other impairments include blindness, deafness, problems with mobility, speech or cognition. As well as adapting their physical facilities (which can be expensive), businesses stand to gain by overhauling their customer service, information and marketing too (which can be relative cheap and simple to do, such as redesigning websites). Many startups are leading the way. Airbnb, a home-sharing website, recently bought Accomable, a listings site for accessible holiday properties, to increase its offering to disabled travellers. Uber, a ride-hailing app, has recently launched uberACCESS, joining Gett and other taxi companies in trying to help wheelchair-users summon rides. Specialist travel agencies, such as Limitless and Planet Abled, have sprouted up to sell holidays to those with disabilities. GWR, the train company that mistreated Ms Davis, has apologised and launched an investigation into the incident. Britain’s Department for Transport has weighed in too, saying her treatment was “entirely unacceptable.” But for Ms Davis it is not enough. She would like the mobility scooter she relies on to carry a legal status much like a wheelchair and for others to be spared the shame and upset she experienced. Clearly when it comes to looking after all its customers equally, the travel industry has some distance left to go.

There are suppose to be laws protecting the rights of disabled people.She should consult an attorney