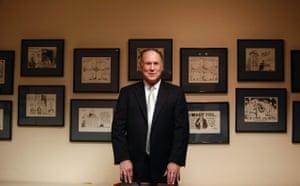 This man wants to convince America beef is healthier than meatless burgers — theguardian.com

The food industry has a “weapon of mass destruction”. His name is Richard Berman. And he has his sights set on destroying the growing appetite for meatless burgers and plant-based meat substitutes. Berman has form in this line of work. A longtime Washington DC lobbyist and PR strategist, he has advised – and tried to shield – some of America’s most powerful industries from criticism. Berman has waged campaigns against animal welfare groups, labour unions and even Mothers Against Drunk Driving. His efforts earned him the title “Dr Evil” from his critics. He embraces the nicknames, displaying them prominently on his website.