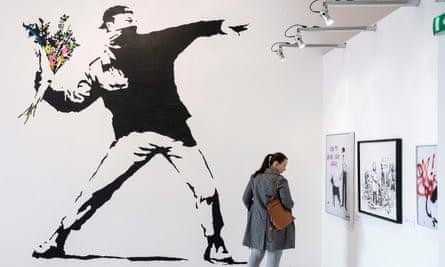 Banksy’s trademark may be at risk after the street artist lost a case that an EU panel said was brought in bad faith and was undermined by a gift shop he set up in London last year.Banksy lost the case against a greeting card company, Full Colour Black, which argued it should be able to use an image of the Flower Thrower stencil mural, which he painted in Jerusalem, because of the artist’s anonymity.In 2014, Banksy’s representatives, Pest Control Office, successfully applied for an EU trademark of the Flower Thrower, but this week that was overturned after a two-year dispute.The European Union Intellectual Property Office (EUIPO) panel said it ruled against the artist because he could not be identified as the unquestionable owner of such works because his identity remained hidden.“Banksy has chosen to remain anonymous and, for the most part, to paint graffiti on other people’s property without their permission, rather than to paint it on canvases or his own property,” the panel said.In October 2019, Banksy set up a bricks and mortar gift shop, Gross Domestic Product, in Croydon, south London, which launched the trademark case into the public eye.When he opened the shop, which offered only online sales, the artist said the motivation behind it was “possibly the least poetic reason to ever make some art” – the trademark dispute.“A greetings card company is contesting the trademark I hold to my art,” he said in a statement. “And attempting to take custody of my name so they can sell their fake Banksy merchandise legally.”The store sold “impractical and offensive” merchandise, the panels said, including disco balls made from used police riot helmets as well as replicas of the stab vest worn by Stormzy during his Glastonbury headline set in 2019.The EUIPO was critical of the shop, which it said undermined his case.The panel of three judges said they found “his intention was not to use the mark as a trademark to commercialise goods ... but only to circumnavigate the law. These actions are inconsistent with honest practices.”Aaron Mills, a trademark lawyer at Blaser Mills, who represented the card company, said the ruling could mean other Banksy trademarks were now at risk.“If there was no intention to use then the mark is invalid, and there is also the question of fraud. In fact, all of Banksy’s trademarks are at risk as all of the portfolio has the same issue,” he told World Trademark Review.Pest Control Office did not respond to a request for comment.