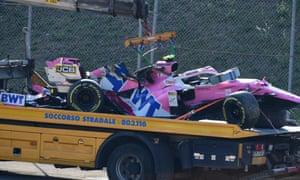 The result bore a familiar air but only after chaos and calamity had brought colour to the Tuscan Grand Prix. Lewis Hamilton emerged as the winner at Mugello with his Mercedes teammate, Valtteri Bottas, in second but only after the world champion had lost his lead, the race had been stopped twice – once for a major accident from which four drivers were exceptionally lucky to walk away unhurt – and no place through the field seemed assured until the chequered flag was waved. Hamilton had made a statement before racing had even begun, wearing his Breonna Taylor T-shirt, but on track he had to repeatedly make his mark to maintain his control and composure in a race that endured three standing starts. “It was all a bit of daze,” he said. “It was like three races in one day. Just incredibly tough today. All those restarts, total focus was needed.” In managing it he took his 90th career win and could equal Michael Schumacher’s record of 91 at the next round in Russia. Schumacher’s tally of seven championships is surely within his grasp too because with eight races remaining he heads the championship on 190 points, in front of Bottas on 135 and Max Verstappen on 110. He earned that lead the hard way on Sunday. Formula One had never raced at Mugello before and the track was an unknown quantity. However fears of a lack of overtaking were unfounded as the circuit proved more than capable of providing passing opportunities. Starting from pole Hamilton lost his lead to Bottas when the Finn made a very good start. It was Bottas’s best chance finally to put the hammer on his teammate but he had little chance to do so. After a safety‑car period triggered on the opening lap, when racing resumed on lap six there was a major crash on the start-finish straight. Bottas was weaving slowly at the front and the midfield bunched up, leading to a domino-effect accident where Antonio Giovinazzi, Kevin Magnussen, Nicholas Latifi and Carlos Sainz careered into one another and the barriers, eliminating them from the race. “That was the worst thing I have ever seen,” fumed Romain Grosjean as the race was stopped. Hamilton noted the lights on the safety car had gone out late, after the final corner so Bottas was still managing the restart on the straight. Certainly it appeared George Russell lurched forward to close a gap in the midfield and the others followed, coming up to speed too soon. It was a highly dangerous incident from which the drivers were lucky to escape unscathed. The stewards investigated and 12 drivers, not including Bottas, were warned but no further action was taken. They noted there was “an extreme concertina effect which dramatically increased as it moved down the field”, but that no driver was to blame. After the subsequent red flag the restart was vital. This time Hamilton made a blistering start, going round the outside of his teammate through turn one and retaking the lead. Bottas’s hard work was undone, found wanting at a key moment and again Hamilton made the difference. Out front he stamped his authority and did not relinquish the lead. The pair, finally able to put in some untroubled laps, promptly opened a huge gap. But it was far from over. Mercedes were once more clearly dominant but would not be allowed to cruise to the flag. After Lance Stroll had a big crash at Arrabbiata 1 because of a mechanical failure the race was again stopped. Stroll was unhurt but the drivers once more climbed from the cars and had to refocus once they returned to the grid. Lance Stroll’s car is taken away after his crash. Photograph: Claudio Giovannini/EPA The restart was again key. Hamilton nailed it and held the lead but proving how fraught a situation it could be Bottas was mugged by Daniel Ricciardo. But the Finn fought back into second, and behind him Alexander Albon did brilliantly to charge up to third for his first F1 podium. The history books will record a Mercedes one-two, which they have secured so many times this season, but unlike in so many other races the way they delivered it at Mugello was far from routine. This glorious old-school circuit, now a firm drivers’ favourite, may not have the financial backing for a place on F1’s usual calendar but it deserves to be there. Renault’s Ricciardo was fourth with Racing Point’s Sergio Pérez in fifth. Ferrari, celebrating their 1,000th F1 grand prix, were again off the pace but at least reached the flag with Charles Leclerc in eighth place and Sebastian Vettel in 10th. Lando Norris was sixth for McLaren, Daniil Kvyat seventh for AlphaTauri and Kimi Raikkonen ninth for Alfa Romeo.