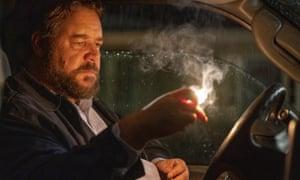 Russell Crowe's Unhinged plea: only he can persuade us back into cinemas | Film | The Guardian — theguardian.com

As if you didn’t already know, this is not a good time to be in the cinema business. They might have reopened, but post-lockdown they are sparsely attended. If punters aren’t put off by the thought of wearing a mask during a film, then they’re put off by the meagre smattering of indie arthouse fare and decades-old ITV2-style blockbusters that count as new releases these days. There is a chance, however small, that some people will simply never return to the cinema again. Russell Crowe (@russellcrowe) You know those days when you’ve done a bunch of promo, station identifications, shout outs and answered the same questions over and over and you think to yourself ... let’s just have a bit of fun now #Unhinged pic.twitter.com/s3WfPK6Gv8 August 17, 2020 Unless. What if someone – some undeniable hero – came swaggering to the fore and jammed a nitro boost up cinema’s bum? What if this majestic figure could achieve the impossible and make going to the cinema seem like fun again? Most importantly, what if this mighty oak of a person was Russell Crowe saying “fuck” into camera quite a lot? It might just work. In a promo clip for his new film Unhinged (released at the end of July here, but just about to come out in the US), Crowe – looking more like wine commercial-era Orson Welles than ever before – starts by addressing the camera with some of the faux-profound platitudes beloved of Oscar presenters. “They say there is a catalyst at the heart of the cinema experience,” he says. “A social contract. A binding, dynamic power that lifts the cinematic experience into a realm of intimate connection between the audience and the screen and the stars in the heaven beyond.” Then he pauses. “They say,” he winks. “But who are they? Some conceited, pretentious fuckwads who try to piss in your pocket and tell you it’s raining. Well fuck that shit.” Then we see clips of Unhinged, where Crowe snorts and growls and grunts and drives a succession of vehicles into as many things as he can, in all likelihood murdering scores of people in the process. “I’ve got a movie out”, he continues. “It’s called Unhinged. I’m not fucking with you. It’s called Unhinged, and it’s going to be in cinemas. Off you go.” To be clear, this is still a performance. Russell Crowe might have found his place as the king of look-at-all-this-bullshit blokeiness of late, but remember that this is still a man so embedded in the movie industry’s culture of luvviness that his reaction to winning a Bafta once involved reciting poetry. So perhaps it’s better to instead see this as a brilliant bit of opportunism. Had it been released at any other time, Unhinged would have looked awful; like the sort of cheap, nasty, vaguely exploitative B-movie that would have made everyone sad about the state of Crowe’s career, had it not been released directly to the wilderness of a Virgin Media movie rental submenu. The reviews certainly back this up. The Hollywood Reporter called it “unwatchable”, Screen International called it “Needlessly unpleasant” and “abrasively stressful”, and GQ called it “sort of terrible”. edgarwright (@edgarwright) On the basis of this trailer for @unhingedmovie, it's very clear that @russellcrowe should do the marketing for ALL MOVIES going forward. Even Disney Plus ones. pic.twitter.com/v6zBdlZNqg August 15, 2020 But now? Now that everything else is ashes and this is all we have, Unhinged is starting to look like cinema’s One Great Hope. Now it looks like a fun, silly diversion from the continued hell of life on Earth. Now it looks like it was made specifically to take our minds off everything. Now, god knows, it sort of looks like a blockbuster. And Crowe knows this. He knows that Unhinged isn’t a great film. It won’t challenge people. It won’t be remembered well. He’ll certainly never win an Oscar for it. But at the same time, he also knows the joy of turning your brain off in a cinema. Of rolling in with your friends, loaded up with sweets and drinks, and giggling about the abject stupidity of whatever’s onscreen. It’s one of the best feelings in the world. More than anything, you sense that this is the feeling that Crowe is trying to stir in us all again. It might not work, because these are precarious times. But if it does, without exaggeration, Russell Crowe might genuinely become the saviour of cinema.