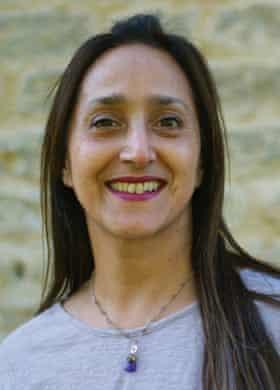 My family left India when I was 18 months old, enticed by the opportunities on offer in the UK in the 1960s. We settled in Nottingham where my father, along with my uncles, took work in the foundries of the Midlands.Jasbinder Bilan. Photograph: Costa Book Awards/PAIt was a very different life from the one they were used to and we all missed home. But my grandmother kept the magic and memories alive through the vivid stories we shared at big family gatherings – stories of the lush landscape, the farm in northern Punjab where I was born, and the dramatic beauty of the distant Himalayas.When I finally made my first trip back to India, it was 28 years later. My dear grandmother had just passed away at the age of 93 and it was a sort of homage to her memory. It was like coming home, but at the same time I was discovering somewhere new and I was full of excitement.I found the chaotic bustle of the cities, the serenity of the countryside and the sounds and smells so inspiring that I set my first children’s books there.‘I found the chaotic bustle of the cities so inspiring I set my first children’s books there.’ (New Delhi pictured.) Photograph: AlamyThe shock of spilling out from Delhi airport into the cow-lined streets was incredible. I fell immediately in love with the beauty of the doe-eyed white cows and the noisy yellow taxis that swerved to avoid them. The visual impact of everything raining down on me at once was an impression I tucked away, ready to bring alive when I began writing my first story, Asha and the Spirit Bird. I wanted to transport my readers into the drama of her world.In Delhi, once the heat of the day had relented, we quickly discovered the best dhabba (street food) stalls. My memories of batter splashed into hot oil to make the wonderfully fragrant pakora went into the mouthwatering food scenes in that book and my second, Tamarind and the Star of Ishta.I was waiting on the platform on my way to Agra, listening to the chattering starlings balanced on the overhead thread of electric cable, with cries from a boy selling chai and the sounds of clinking glasses adding to the atmosphere. I relived this scene when I decided to send Asha on a train without a ticket to find her papa in the fictitious city of Zandapur.Agra railway station. Photograph: Davidovich Mikhail/AlamyBut more than anything, it was on the journey to Punjab that my heart and imagination collided. As happens with so many of us, it is the journey back home that tightens your chest and brings an ache to your throat.My parents always argued about whose village was more beautiful and I have to agree with my father: Raipur Dabba – set amid squares of bright green wheat, the house with its azure shutters and the red dust farmyard – was stunning perfection. My first view of the family farm brought with it the thunder of past voices, from a time when it was filled with laughter, shouts and the hum of daily life.It was this visual that sprang to mind when I was deciding where Asha’s story would start. Intricate details such as the neem tree with its deep green leaves, where our family monkey Oma climbed with my brother as a baby in her arms, and the redbrick well where I balanced as a toddler and was saved by my grandmother, both featured – with a strong dash of imagination.The holy northern city of Amritsar, with its winding dusty streets and the magnificent Golden Temple, Harmandir Sahib, was one of the special stops on our journey. Water is like the blood of India, whether it is from the unstoppable force of the monsoon or the tranquil pools that surround this temple.I was sitting on the edge of the Amrit Sarovar, the holy pool, mesmerised by the reflection of the glittering dome. Watching the pigeons splash in the water and listening to the prayers, I remembered my grandmother’s belief in reincarnation and wanted to believe that she was watching over me.‘I was sitting on the edge of the Amrit Sarovar, the holy pool, mesmerised by the reflection of the glittering dome of the Gurdawara.’ Photograph: Narinder Nanu/Getty ImagesThis was the hopeful message that inspired the idea of Asha’s guiding spirit bird, and gave my 11-year-old heroine the power to face her fears.In Amritsar we went to a relative’s house for a cup of tea. As so often happens in India, beyond a very ordinary wooden street door we found ourselves in the most unexpectedly beautiful house. The scents of the gorgeous rose garden bordered by shady verandas, ran through my veins when I imagined Alakapuri, my main character Tamarind’s ancestral home.If I based the character of Asha on my grandmother as a girl, Tamarind is much more a version of myself. Seeing the place I was born for the very first time had a huge emotional impact and helped me to give Tamarind her burning desire to discover who she is. I wanted Tamarind to immerse herself in India, in its history and culture, to discover a deeper part of herself and find out who she really is – just like I did on my journey.Asha and the Spirit Bird, winner of the Costa Children’s Book Award 2019, and Tamarind and the Star of Ishta are published by Chicken House (£6.50 at the Guardian Bookshop)