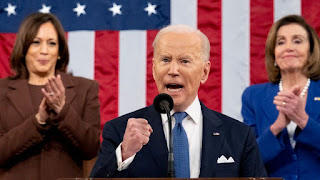 What message was Biden sending to Putin? — egypttales.com

Joe Biden spent the first 15 minutes of his State of the Union address talking about Russia's invasion of Ukraine, an event that certainly has transfixed the world more than the latest twists and stumbles of his domestic legislative agenda. Although Mr. Biden's annual speech is billed as a message to Congress, his comments on Ukraine were tailored to four distinct audiences - with four distinct messages. Here's a look at what he had to say and to whom.   To the Ukrainian people Early in his speech, Mr. Biden called out Ukrainian ambassador to the US Oksana Markarova, seated in the balcony next to Jill Biden and other distinguished guests. "Thank you, thank you, thank you," he said, as members of Congress cheered. The United States has already sent Ukraine military, economic and humanitarian aid. On Tuesday night, Mr. Biden wanted to send a message that America cared about Ukraine's fate and stood by the embattled nation. "From President Zelensky to every Ukrainian, their fearlessness, their courage, their determination inspires the world," he said. Although Kyiv may be encircled by Russian tanks, his message was that more American help is on the way.     To Russia's leader Mr. Biden's message to Vladimir Putin was simple - the Russian president had "badly miscalculated". The economic pain that the US and Europe had imposed on Russia for its invasion was just beginning. The rouble was crashing, the Russian stock market was in free-fall, Russian oligarchs would have their "ill-begotten gains" confiscated, and Russia was losing access to key technologies. There was another message to Russia beyond one of economic pain, however. He also emphasized that the US and its allies would fight to defend "every inch of the territory of Nato countries". Mr. Putin has put his nuclear forces on elevated alert and warned of devastating consequences if any nation intervened in Ukraine. Mr. Biden's message was to spell out, lest there be any doubt, when and where America itself would fight.   To Europe The US and its European allies have been in remarkable lockstep as they imposed sanctions on Russia and offered military aid to Ukraine. Time and time again during his speech, Mr. Biden celebrated this fact. "He thought the West and Nato wouldn't respond," the president said. "Putin was wrong. We were ready." Mr. Putin may have got that impression from the chaotic withdrawal from Afghanistan, which sparked criticism directed at Mr. Biden for not consulting allies. But this was a topic the US president notably avoided during his speech. Mr. Biden's emphasis on the key role Europe has played in the response to Russia's invasion may have been part of this administration's continued effort to soothe frayed relations. Over the course of his presidency, Mr. Biden has spoken repeatedly about what he sees as an era-defining global conflict between democracies and autocracies - and that it would take cooperation among the democracies of the world to prevail. It was a theme he touched on again on Tuesday. "Democracies are rising to the moment," he said, "and the world is clearly choosing the side of peace and security."       To the American people A public opinion survey released earlier on Tuesday showed that a majority of Americans were most interested in hearing what Mr. Biden had to say about the conflict in Ukraine. Biden's message was that the global unity of response - from Asia to Latin America to Europe and even Switzerland - was a testament to his administration's efforts. "American diplomacy matters," he said. "American resolve matters." One of Mr. Biden's campaign pledges was to restore the US standing in the world and rebuild strained relations with allies after the tumultuous Trump years. This, he implied, were tangible results of that effort, coming when the stakes were at their highest. Mr. Biden also had a message to Americans we may be concerned that the possibility that US soldiers would be at risk in the Ukrainian conflict. While he spelled out US obligations to Nato allies, his message about what the US would do in Ukraine was also direct, that US forces "are not engaged and will not engage in conflict with Russian forces in Ukraine".     Finally, Mr. Biden had to address what is sure to be the increased economic hardship that Americans will bear because of the conflict in Ukraine - hardships added to those already caused by the Covid-19 pandemic and ones that may come at a political price for a president who's standing with the US public is already weak. He said that the US will attempt to craft its sanctions to target the Russian economy, but that costs for the rest of the world were unavoidable. He announced that the US will release 30 million barrels of oil from its strategic reserve, but that move is more symbolic than it is likely to blunt the rising price of gas for American consumers. "I know the news about what's happening can seem alarming," he said, "but I want you to know that we are going to be OK." That may be the most important message for Mr. Biden's political fortunes. If the American public doesn't feel OK, the president and his party may bear the consequences in November's mid-term elections. Think your friends would be interested? Share this story! BBC NEWS Labeled Posts Blogger Widget in Tab Style

He disregard the subject! Biden has presented to the world that USA is weak! Which is not accurate!

I understand this may cause some negative feed back.