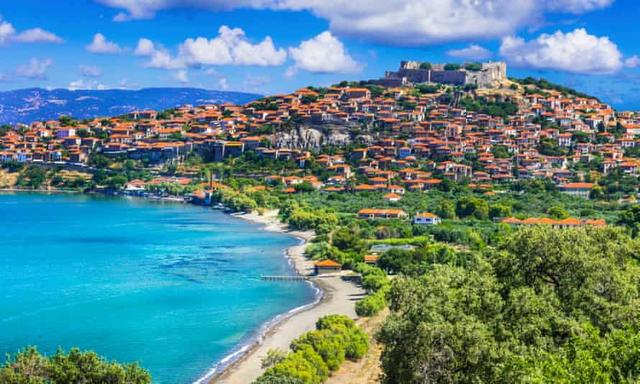 The meal that takes me back to Lesbos – plus the recipe | Greek Islands holidays | The Guardian — theguardian.com

Lesbos is Greece’s third-largest island, sitting in the Aegean Sea just 16 miles off the Turkish coast. It’s a breathtakingly beautiful place, with long stretches of sandy beaches next to crystal-clear waters, thickly forested mountains with therapeutic hot springs, salt marshes that are home to flamingos and wild birds, and more than 11m olive trees, cultivated for the island’s most important product: olive oil.But Lesbos also carries a heavy load, for its story has taken on a more troubling aspect in recent years. That proximity to Turkey has made it the first stop for many refugees fleeing conflict in countries to the east, who arrive by boat after a perilous journey over land and sea. In the past six years, 500,000 refugees have passed through this island – a staggering number given that its local population is 40,000.I came to Lesbos to research my new cookbook exploring what borders and identity mean in the 21st century, and how the changing food culture of the eastern Mediterranean reflects the wider story of migration. It was a journey that was as joyous as it was heartbreaking.View of Molyvos (Molivos) town, Lesbos. Photograph: Getty ImagesAs well as feasting on local specialities, such as rice-stuffed vine leaves and juicy chicken souvlaki, I also cooked and ate with refugees, many of whom were living in overcrowded and unsafe camps, and who gathered in the numerous volunteer-run initiatives to eat together and share some moments of solace. Conversations about food offered a happy escape and distraction, and over the dining table we spoke of the flavours of Syria, Afghanistan, Iran and Iraq, and the wonders of allspice, sumac and Aleppo pepper, swapping recipes for favourite dishes and reminiscing about meals shared with friends and family in happier circumstances.In the evenings, I would often dine at Reem, a restaurant set up by Mahmud Talli, a doctor from Syria who found himself trapped on the island and opened this place in its capital, Mytilene. Reem serves traditional Syrian food such as falafel, hummus and baklava to tourists, volunteers, locals and refugees. I always ordered the grilled chicken, marinated in warming spices and sharpened with the tang of pomegranate molasses. I recreated a version of it in my London home and this recipe always takes me back to Lesbos’s beautiful yet haunted shores and reminds me that food culture is like a language, constantly evolving and telling the story of the movement of people. For as long as humans have existed, we have travelled, and food has been one of the greatest gifts we take with us on our arduous journeys. Pomegranate and sumac chicken Photograph: Matt RussellServes 4The chicken can be marinated ahead of time and popped into the oven shortly before eating. A whole chicken, jointed into eight pieces, can be used instead of the thighs.8 large skin-on, bone-in chicken thighs3 tbsp olive oil3 tbsp pomegranate molasses1 tbsp tomato puree½ tsp ground allspice2 tsp Aleppo pepper (pul biber)1 tsp sumac2 fat garlic cloves, crushedsalt and black pepperPlace the chicken in a large bowl and pour all the marinade ingredients over it along with 1½ tsp salt and ½ tsp black pepper. Using your hands, massage this into the chicken until it is evenly coated, then cover and transfer to the refrigerator to marinate for at least three hours.When you are ready to eat, take the chicken out of the fridge and let it come to room temperature. Heat the oven to 200C/fan 180C/Gas 6. Place the chicken on a baking tray and roast for about 35 minutes, or until the juices run clear when it is pierced at the thickest part. Serve with rice and salad. Ripe Figs: Recipes and Stories from the Eastern Mediterranean by Yasmin Khan (Bloomsbury) is available from the Guardian Bookshop